What goes on in the human brain? From inspiring Alternate Realities experiences to raw and thought-provoking stories, in this year’s Doc/Fest lineup we are investigating the mystery that is the human mind.

Featuring a selection of intimate stories, this year’s film programme takes us through raw thoughts and emotions by sharing the stories of those who we rarely hear. Among this is And It Was The Same With My Son - directed by Noemi Varga.   A short poetic reconstruction of a mother sharing her journey after losing her son to radicalisation, in this moving short film we see the heartbreak and an honest description of how it feels to be left to pick up the pieces.

Exploring the growing world of life coaching, mindfulness and efforts towards spiritual transformation, 'Now something is slowly changing' asks the question of how can you measure change, and what does personal development look like when there are increasingly popular anxiety-soothing sources such as ASMR YouTubers and Quarter-Life Crisis Coaching that can be observed from a distance. It’s a bold and rigidly structured documentary about the modern­ day quest for meaning, personal growth and performance improvement

Studying the science behind how our brains work and the deep parts that control our actions. Hunting for Hedonia examines and explains the future growth in the use of so-called 'deep brain stimulation’, and studies the question of if there is place deep in the brain that can take you from pain to pleasure or if tiny pulsing electrodes in your head could change your mind. 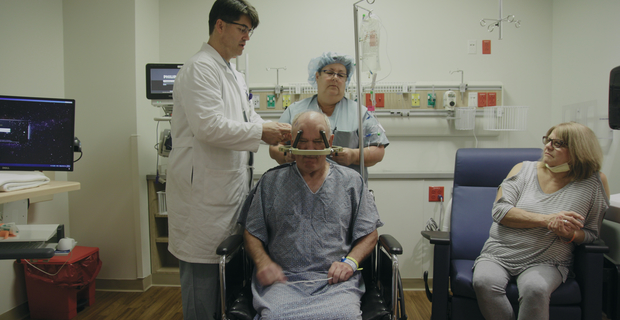 What does it mean to live in a committed relationship? Determined to probe the relationship between infidelity, sex and marriage, Bara Jichova Tyson creatively intertwines collage, archive and confessional interviews with unseen subjects. In doing so she gets subjects to open up about the often extraordinary lengths that they go to in order to lead lives enriched by both love and desire. Talking About Adultery is a combination of 50 ethnographic interviews recorded over five years with lovers, husbands, wives, mistresses, and also participants in non-traditional, polyamorous relationships - anonymously filmed in New York, the Czech Republic, a vast cactus garden in Sicily, and the homes of the film’s subjects. Jichova Tyson creates a visual language which includes: live collage-making drawn from her original work as a fine artist; correspondence with her future partner; and the oblique but ultimately revealing perspective of an Italian philosopher of plants and gardens.Talking About Adultery was an opportunity to create an intimate conversation among many people on the theme of trust and honesty, and create space for the viewers to continue those conversations.

According to a 2017 report from the Jo Cox Commission on Loneliness, more than 9 million people in Britain—around 14 percent of the population—often or always feel lonely. Through disarmingly honest testimonies left anonymously on an answer phone machine, ‘Disconnected’ by Alice Aedy explores the silent loneliness epidemic amongst young people in the UK. The present appears to be a sci-fi dystopia. Against visions of British cities and faces illuminated by smartphones, anonymous voicemails from young people are left for the Minister for Loneliness.

"When will this silence be done?" wonders the haunted Viktor Stepanov, a bearded recluse and self-professed wood goblin, who has lived for twenty two years in an old shack with a iron stove, deep in the Russian forest. Hermit directed by Artem Moskalev is an astonishingly spare and poetic vision that acutely observes one man's deep bond with nature.

Renata believes that the story of her life is the most extraordinary story. Alexis Delgado Búrdalo  is filming her and believes that he is in front of the character of his life. Immersed in the desire to make a movie, they play and create a haunting, creative portrait of regret. They show themselves as they would like to be seen. Renata is serving a sentence for a brutal murder.

“I met Renata by chance a few years ago and quickly became entranced by her charisma and enigmatic personality. I found it fascinating to watch and listen to her and soon it became clear: I had found the protagonist for my film. I soon discovered that the feeling was mutual and that she, happily, had chosen me as her director, almost as if she had been waiting for this encounter for a long time. On this foundation of trust we set out on an adventure to make a film together, a film with all of the limitations and difficulties of a prison, shot with just a small camera and an audio recorder. Despite this we both filmed with strength and conviction, we were involved with something important to us and our lives. Our time was limited and we were aware that it would run out; we both knew this. But we filmed, possessed by a strange sensation of freedom and play, a feeling that I at least, hadn’t felt since my childhood. Much later, in the editing studio, I discovered that it was very difficult to paint a portrait of Renata. The images we shot expressed intimate gestures without expressing a specific story. I filmed her without judgment, not giving much importance to where we were, fascinated by her gaze and her charisma. I sought out what connected me to her rather than what separated us. The subject of the murder was always an uncomfortable topic for both of us. It was the tragic story of the painter that brought structure and shape to this film despite this, This Film is About Me is a film that is more about the desire to live in imagination and poetry rather than in the difficult and sad reality that surrounds us.” (Alexis Delgado Búrdalo, director)

Playhouse is a dive into the absurd world of two female lovers, as they experiment with notions of power and representation, playfully alternating between who is in charge and creating a film within the film. They visit a holiday home, where they re-enact scenes of powerplay and desire from classic films. Conversations and tensions explore their dynamic and how they relate to cinematic representations.

“Hi AI” is an insightful and laconic melding of sci-fi and documentary that explores the ethically complex universe of artificial intelligence. Moving between a lonely American scientist and an estranged Japanese family, this often funny futuristic drama portrays people seeking human connection with the robots that have entered their lives. Point of View, Canada's premiere magazine about documentaries and independent films,  "It’s been six years since Spike Jonze told the story of Theo and Samantha in Her. Cut to 2019 and Isa Willinger offers the story of Chuck and Harmony in Hi, AI. One difference between the films, and easily the most unsettling one, is that Her is a science fiction drama with its love story of artificial intelligence, while Hi, AI is a documentary. What once was speculative is now reality."