We're proud to reveal the full line-up of films premiering in this year's Rhyme & Rhythm strand. The titles will screen in Sheffield and online, 4–13 June.

Rhyme & Rhythm is where cinema and other artforms meet. Through music and performance, visual art and sport, each film offers encounters and inspirations to a different beat.

Taking audiences from the Midlands in England to Australia, from Austria, Ukraine and France, to Egypt, Israel, Japan, Canada, Cuba and the USA, in total, 20 films will screen as part of the section, over half of which will be World, International or European premieres.

Among others, the programme will feature

We see dance on film in Firestarter: The Story of Bangarra (Nel Minchin & Wayne Blair), Gallant Indies (Philippe Béziat) and Shelly Belly inna Real Life (Cecilia Bengolea). The screen becomes a stage in Maisie (Lee Cooper), a world premiere and Roses: Film-Cabaret (Irena Stetsenko). Choral ensembles feature in the world premiere of Men Who Sing (Dylan Williams) and Soy Cubana (Jeremy Ungar & Ivaylo Getov), and visual art in Drawings of My BF (James Cooper). Women in sport is the subject of Lift Like a Girl (Mayye Zayed), Stormskater (Guen Murroni), and The Witches of the Orient (Julien Faraut).

Singer, poet, writer, and actress Lydia Lunch will also give a talk as part of the festival: So Real It Hurts. Having collaborated with a number of filmmakers over the years, Lydia will speak about being the star of Beth B’s Lydia Lunch - The War Is Never Over, how she documents her reality through multiple mediums, and what success looks like as a fiercely anti-commercial artist.

Melanie Iredale, Deputy Director commented “Film has such a rich history of interacting and interweaving with other practices, and we couldn’t be more proud to announce a programme which does exactly that; and in a city in which music, theatre and art is our touchstone. We want to welcome audiences to watch - sing and dance - along with us in June, in Sheffield and online.” 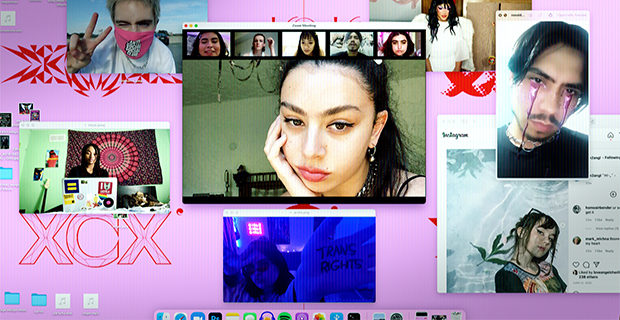 Overwhelmed by the COVID-19 pandemic and searching for any means to mediate lockdown, pop star Charli XCX enlists the help of her fanbase to record a new album in 40 days. The film shows the power music has to connect people and how transparency in the creative process can offer a cathartic form of escapism. 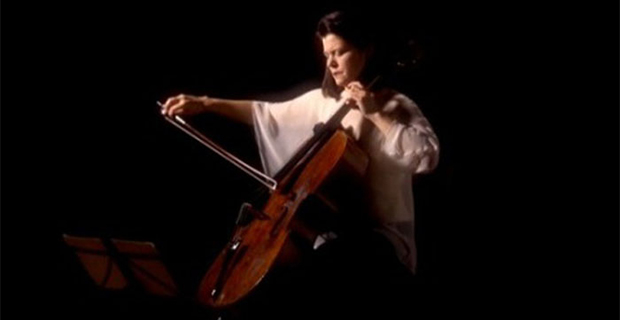 Filmed and introduced by Chantal Akerman, world famous cellist Sonia Wieder-Atherton talks about herself and her musical path. After this, Wieder-Atherton takes over the narrative, sitting before the camera for an extended presentation of her life and art, including a series of beautifully-framed shots that show her playing various short pieces, both solo and with a small ensemble. 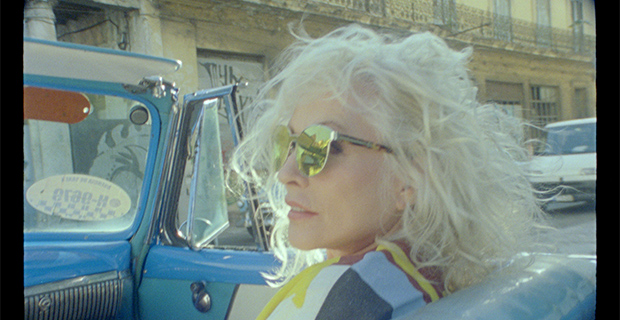 In 2019, a lifelong dream comes true for Blondie when the legendary post-punk band is invited to Cuba. When they hit Havana, New York’s new wave blends with Latin beats as filmmaker Rob Roth fuses street sequences shot on Super 8 and 16mm with digitally-filmed performance footage, creating a love letter to the city penned in partnership with Debbie Harry and the group. 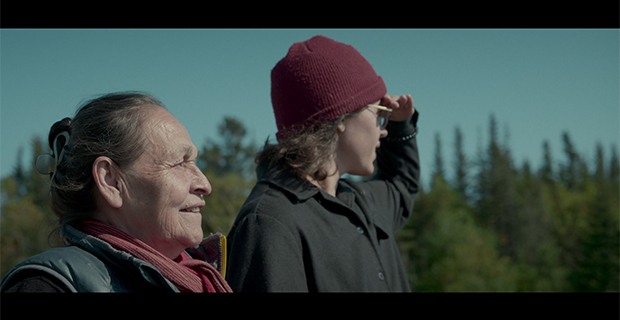 This tender portrait of Innu poet, writer, filmmaker, and storyteller Joséphine Bacon follows her from the snowy streets of Montreal to the region along the coastal mouth of the Saint-Laurent river, occasionally accompanied by Ilnu-Québécoise poet Marie-Andrée Gill. Bacon talks of her efforts to preserve her elders’ traditions, which the forces of Canadian colonisation have attempted to stamp out. 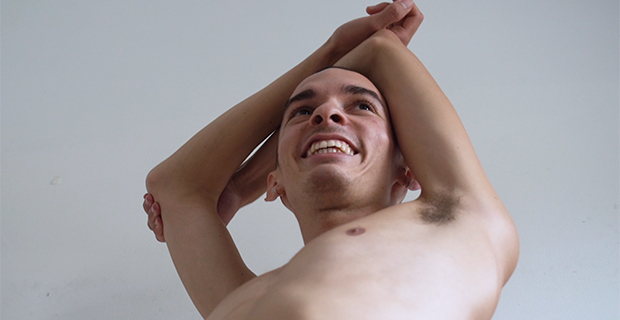 The artist Wilfrid Wood and his muse Theo Adamson have, over the course of their relationship, produced hundreds of drawings together. The two lovers, who first met on a gay hook-up app, discuss the romantic ideals and human realities of the artist-muse dynamic, and the role that art has played in bringing artist and model together as BFs. 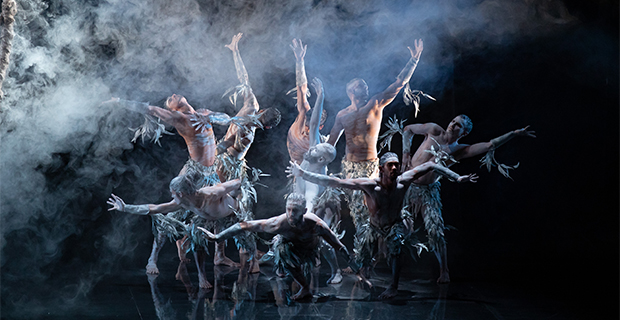 The story of three Aboriginal brothers, who took a young dance company and, with its founders and alumni, turned it into a First Nations powerhouse. Firestarter explores the loss and reclamation of culture, the burden of intergenerational trauma, and the power of art as a messenger for social change, care, pleasure and healing. 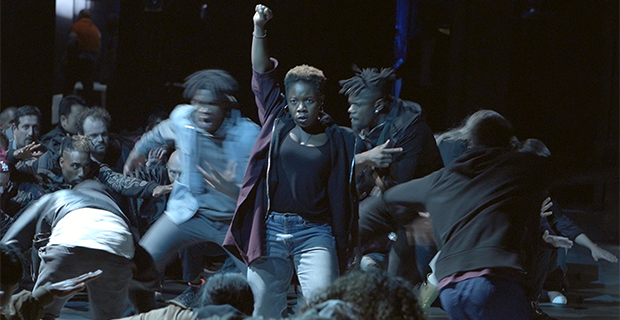 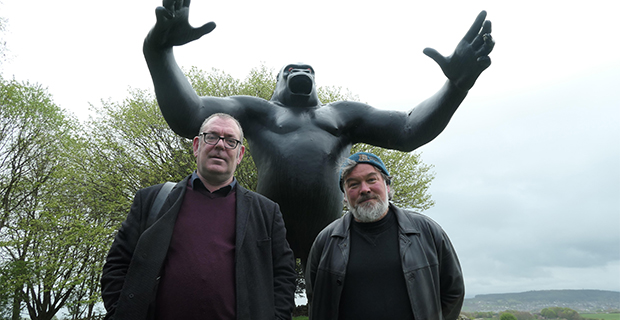 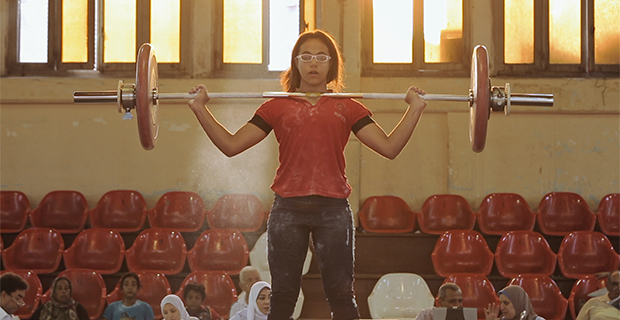 On a corner-lot in the Egyptian city of Alexandria, female weightlifters train to become Olympic champions. Following in the footsteps of some of Egypt’s most famous athletes, 14-year-old Zebiba trains under the tutelage of the charismatic Captain Ramadan. Can Zebiba direct her focus to be the weightlifting champion that her coach feels certain she is capable of becoming? 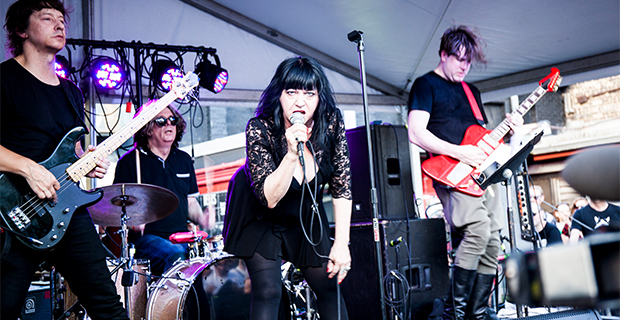 Underground filmmaker Beth B’s Lydia Lunch: The War Is Never Over is the first in-depth documentary on the titular no wave artist. A plethora of rare archives takes viewers into the 1970s New York underground scene where the magnetic, unapologetic Lydia takes to the stage to sing about sex, desire, violence, and her refusal to be a victim of male oppression. 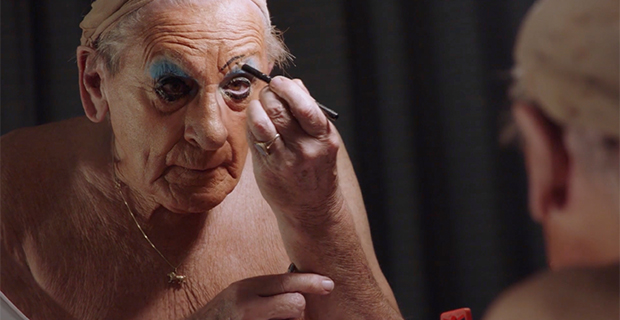 An intimate portrait of aging and friendship as Maisie Trollette, Britain’s oldest drag artiste, prepares for the performance of a lifetime while battling Alzheimer’s. Featuring Broadway classics such as ‘Lady is a Tramp’, ‘One’, and ‘If I Never Sing Another Song’, Maisie is a heart-warming, and often heart-breaking, peek into the world of a character more colourful than his gowns. 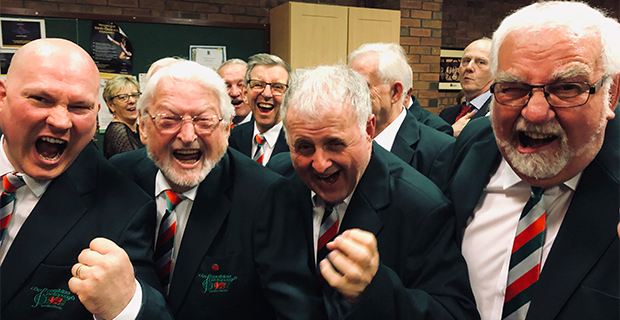 The Trelawnyd Male Voice Choir has a proud history, and its demise reflects the industrial decline of North East Wales. Now facing a decline in membership, the choir must act fast or face extinction. With an average age of 74, they begin a hunt to find “brown haired men” in their 40s and 50s who can take the choir forward. 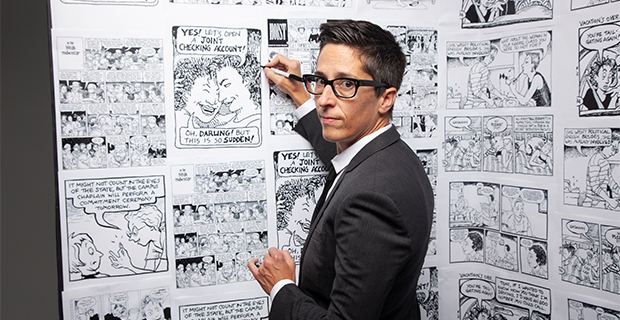 From Come Out Comix to Fun Home and Brown Bomber & The Diva, zine culture comes to life on screen in this celebration of queer cartoons and graphic novels. Artists Alison Bechdel, Howard Cruse, Jennifer Camper, Rupert Kinnard, and Mary Wings tell of how they tackled issues of identity and challenged censorship through pen, paper, intelligence and imagination. 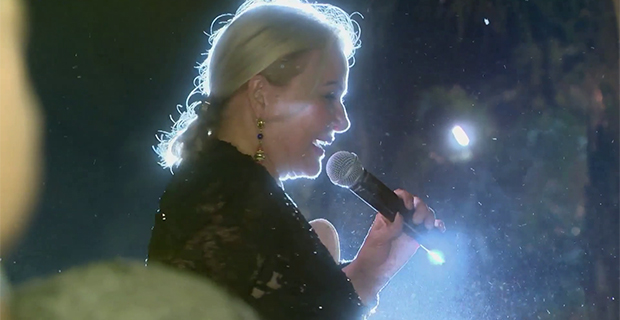 Armed with her camera, actor-turned-director Yaël Abecassis follows her mother, the legendary Moroccan singer Raymonde, in an attempt to understand and redefine their relationship. This film shows a mother and daughter as bound by pain, guilt, admiration, and above all else, their limitless love for music and each other. 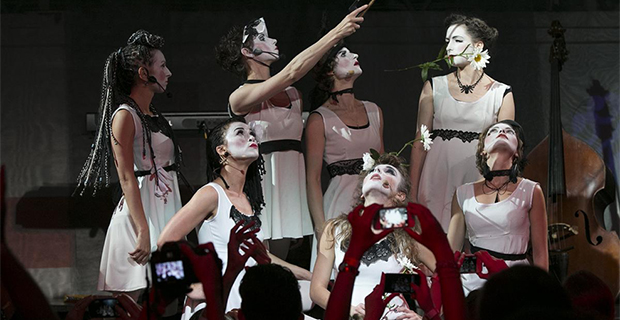 From the Ukrainian uprising came the Dakh Daughters, a punk cabaret performance act comprising seven artists, who play 15 instruments between them. The film follows preparations for their first stage show, Roses, a multilingual and multi-instrumental tragicomic musical theatre production through which the group explore their roles as artists, as women, and as citizens living through times of revolution and war. 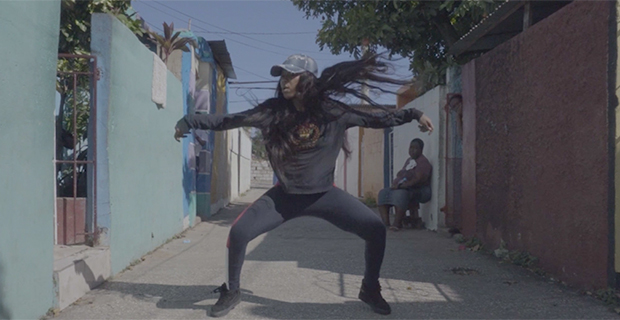 Artist and choreographer Cecilia Bengolea collaborates with Jamaica’s dancehall scene to capture the cultural influences within and upon the Caribbean island art community. Narrated through movement and music, the film follows the language of dancehall, progressing from the intricate rhythms of the jungle landscapes to the choreography of the people whose passion-practice it follows. 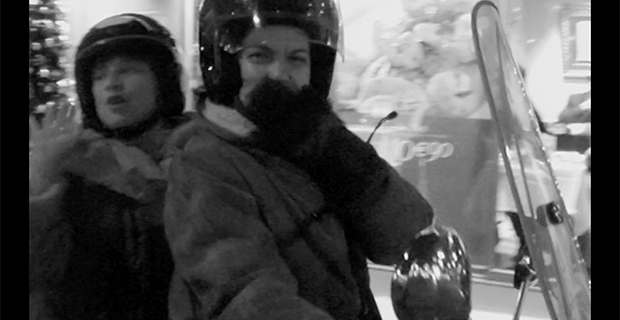 Reviewing tapes shot over a decade, filmmaker Vivian Ostrovsky rediscovered a night sequence showing Chantal Akerman and Sonia Wieder-Atherton leaving a brasserie that they had all dined at in Paris. From this, Ostrovsky decided to focus on the role of sound in Akerman’s films and her collaboration with Sonia Wieder-Atherton, the cellist with whom she made more than 20 films. 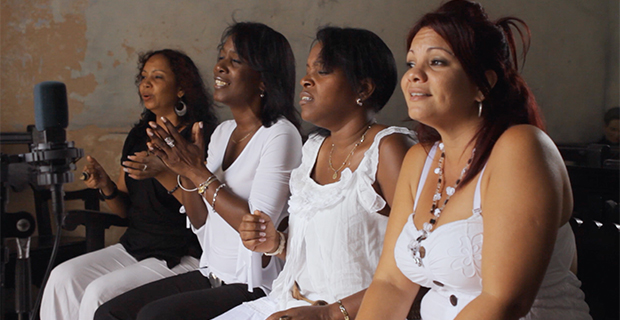 Just as diplomatic relations between the US and Cuba begin to falter, the Vocal Vidas, an all-female a cappella group from Santiago de Cuba, are invited to perform their first show in America. What starts as a concert soon becomes a journey across borders: an affirmation of the connective power of music, even in the most uncertain times. 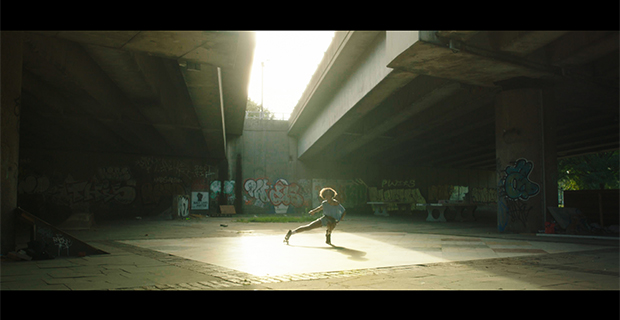 Meet Stormskater – a London-based roller-skater who started skating by picking up tips and techniques from other skaters in different spots in the city. Now, she’s one of the most well-known skaters in the UK. She gives us insight into the increasingly popular sport and its community, its relevance around appropriation, ownership, authenticity and the fundamental need for space. 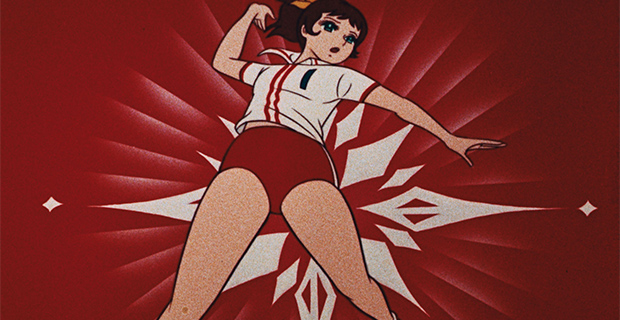 Former players of the Japanese women’s volleyball team, all now in their 70s, reunite to eat, talk, and share their memories. Mixing anime, archive and live-action footage, The Witches of the Orient spans from the squad’s beginnings through to their triumph at the 1964 Olympic Games in Tokyo, which followed a record 258 successive wins that remains unbeaten to this day.

The full programme will be announced on 12 May, at which point individual tickets for the film programme, in Sheffield and online will be available to book. Online Industry Passes are available now to filmmakers, artists, freelancers and members of the film, digital art and related communities from all over the world to engage with the artistic and industry programmes online. An early bird offer is available until 11 May.