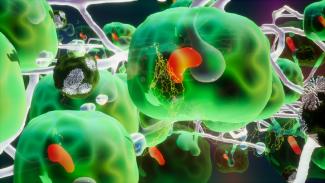 Amidst the rubble of broken symbionts, traces of a resurgence appear, flora pushing through.

Multi-species assemblages signalling, exchanging, building. The fungus that facilitated life on earth, again inspiring new worlds.
Gregory Herbert has collaborated with Professor Katie J. Field to explore Field's research on mycorrhizal fungi, including species of fungi that could reverse some of the effects of the climate catastrophe thanks to their ability to function efficiently under high levels of atmospheric CO2.

Taking influence from Interfacial Apoplast, the space between the plant root cell membranes and mycorrhizal fungal hyphal filaments where nutrients are symbiotically exchanged, Herbert has created a speculative portal where we can learn from these cycles of reciprocity and learn to join the sympoiesis.

Below, find an essay expanding on the collaborative process between Gregory Herbert and Professor Katie J. Field:

Spaces for Symbiosis
by Anna Souter

In another time, plants emerged from salty oceans, tentatively reaching tendrils into unfamiliar air.
Rootless, they became new with fungi, whose filamentous strands sought nutrients among rocks and recently formed soils.
In return, the plants provided carbon, produced through photosynthesis under a younger sun.
The atmosphere began to shift, creating the conditions for new forms of life.
Sympoiesis (making-with) was successful. The earth began to vibrate with green vigour.

Professor Katie Field conducts research into mycorrhizal fungi and their relationships with plants under different atmospheric conditions, recreating environments from 470 million years in the past up to the present day and beyond into future possibilities. Her work has identified that multiple different species of fungus have evolved to form mutually beneficial symbiotic relationships with plants. She has established that some plants are able to tap into more than one kind of mycorrhizal network at once and perform several types of multispecies interactions.

Because the exchanges between plants and fungi change under different atmospheric conditions, Field theorises that being able to link up to various fungal species gives plants greater adaptability in a changing climate. This could have far-reaching implications both for climate modelling and for reversing some of the impact of capitalist-driven climate breakdown. For example, nurturing the symbiotic relationships that function best under higher levels of CO2 could both assist carbon draw-down and stabilise food production in the future.

In their conversations in the laboratory and online, Katie Field and artist Gregory Herbert found themselves focusing on the interfacial apoplast, the space between plant root cell membranes and mycorrhizal fungal hyphal filaments in which nutrients are exchanged. Very little is known about how the transfer of nutrients between species occurs, but scientists have proposed that it involves transporter proteins which wrap themselves around particles of nitrogen, phosphorous, and carbon, carrying them through the interspecies zone.

Herbert’s new video work explores the interfacial apoplast as a speculative space in which to imagine alternative forms of sympoiesis, collaboration, and reciprocity. Taking the plant-fungal symbiont as a model, Herbert has worked collaboratively to create this work; as well as emerging from an ongoing dialogue with Katie Field, the piece draws together the skills of dancer-choreographers Nicolette Whitley and James Lawrence Henson with those of 3D artist Sarah Blome and musician Andrew PM Hunt. Zooming in on the places where symbiosis happens, Herbert questions what it means to act together and explores how resurgence and repair are always the work of many organisms.

The viewpoint of the piece spirals through different scales until it reaches the zone between root cell membrane and fungal filament. Here, vibrating forms move in groups, fluidly shifting to the rhythm of the soundtrack. The floating forms echo 3D digital renderings of gestures made by the dancers recorded through motion capture. The dancers were asked to interpret the movements of cells and of transporter proteins in the interfacial apoplast, creating sequences inspired by imaginatively inhabiting these profoundly unfamiliar perspectives.

By translating and re-translating gestures and images across the human body and the vegetal and fungal spheres, Herbert’s work proposes a radical fluidity between species, suggesting that we have the ability to learn from nonhuman relationships in order to live more generously. The piece also conceptually traverses a vast range of scales, from the exchange of carbon atoms in unknown cellular spaces to the increasing concentration of carbon dioxide in the dangerously overheated planetary atmosphere.

Hundreds of millions of years ago, fungi facilitated new forms of earthbound life, contributing to novel ways of living. Under the ecological crisis and shifting climactic and atmospheric conditions, could we learn from plant-fungal symbionts to break free of damaging capitalist cycles and instead adopt dynamic reciprocity as a model for life? Could we emerge into sympoiesis?