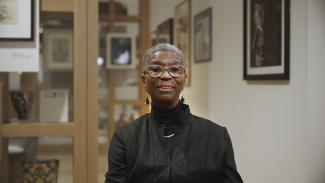 Overnight on 24th June 2020, graffiti reading ‘RIP SENI’ appeared on a public artwork outside Bethlem Royal Hospital, a psychiatric hospital in South London. The red spray-painted letters called attention to Seni Lewis, a 23-year-old black man who died at the hands of 11 police officers while in the care of the hospital in 2010. The artwork had been created by Turner-prize nominee Mark Titchner. It was made up of eight placards asking questions about mental capacity and assessment, creating a powerful resonance between the artwork and the new graffiti. This film reflects multiple perspectives, from mental health professionals to families who have lost loved ones in police custody, prisons and psychiatric hospitals. It explores Seni’s story, the crisis of mental health and racism in the UK, the long fight for justice and what happens when members of the public take art into their own hands.

RIP SENI is followed by an in-person Q&A with Aji Lewis and Lizzy Reid which you can also watch below.