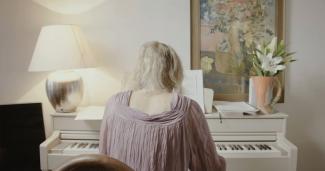 A moving and joyful time capsule, Alive introduces opera singer Marilyn Minns, showing some facets of her present condition before delving into her past. Suffering from Alzheimer’s, her memories are increasingly fragmented. Archive photography of Minn’s childhood is narrated using a 2014 interview, in which she talks about her childhood singing, and about her brief stint in the band Jokers Wild (whose lead singer, David Gilmour, would go on to form Pink Floyd). Weaving between the past and present, Alive introduces the man who will become her husband, a disgruntled lover, notable performances she took part in, and documentation of the mobility that her musicality awarded her. Following the shared reading of a letter – in which she outlines an episode in her life that she refers to as “the Russian saga” – Marilyn surmises the roles family, friends, passion, and love have played in her life, landing the film with a trailing air of hope.

Alive will be followed by an in-person Q&A with Makeda Matheson which will be live-streamed from the cinema to Selects.

Songs for the River + Alive