The Battle of Denham Ford 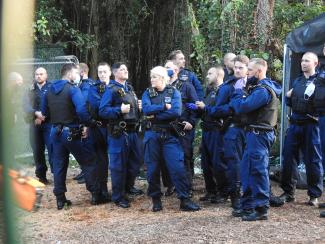 Currently a primary focus for environmental campaigners in the UK, HS2 is a controversial new high-speed rail line being built from London to the North of England. Documenting a single day on the front line of battles against the HS2 construction, The Battle of Denham Ford tells the story of attempts by HS2 contractors to fell a tree that overhung their compound. A protest camp sits adjacent to the compound, and, hearing of the plan, the activists installed a climber in the tree. As the day unfolds, the film documents as a range of private security contractors, with support from the police and emergency services, try to regain possession of the tree. Raising questions about the relationship between private citizens, corporations, and the state, the film places the viewer on the ground, offering a perspective that is as close to the experience of being there as any film could deliver.

The Battle of Denham Ford will be followed by an in-person Q&A with Rob Curry and Tim Plester which will be live-streamed from the cinema to Selects.

Portrait of Kaye + The Battle of Denham Ford