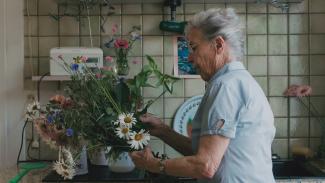 In 1954, Mamaddi Jaunarena, 22-years-old, took a boat from Le Havre to New York. But Mamaddi’s journey began before, in a film theater in her hometown, Ortzaize, in France, with images that affected her life and remained with her forever: a beautiful Cadillac, a young woman, the blue sky. This is the imagery of emmigration, and its often crude reality.

Blue sky will be followed by a live online Q&A with Lur Olaizola Lizarralde which will be live-streamed from the cinema to Selects.

HOW CAN WE EVER LIVE TOGETHER