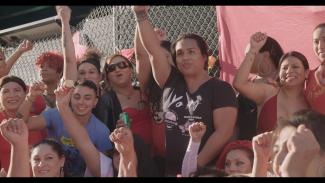 The result of the collaboration between Nicola Mai and the TRANSgrediendo Intercultural Collective – a grassroots association defending the rights of trans Latina migrant women in Queens, New York City – CAUGHT acts as a tribute to the work and legacy of Lorena Borjas, the mother of Latin trans women living in Queens, who was one of the first victims of COVID-19 in New York in March 2020. CAUGHT mixes collaborative ethno-fiction methods with an observational documentary mode to involve its participants throughout its production. Written and performed by members of the TRANSgrediendo Intercultural Collective, the film follows Rosa and Paloma as they face transphobic violence, persecution from the police, and fight against a hostile political environment in the US, while also expressing their identities in positive ways during a drag show that allows them to counter their marginalisation and stigmatisation.

CAUGHT will be followed by an in-person Q&A with Nicola Mai which will be live-streamed from the cinema to Selects.