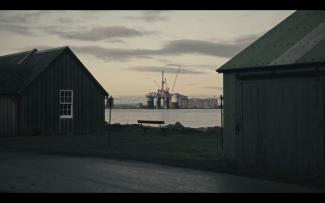 Divided into three parts, Cold Stack charts the melancholic decline of the oil rig industry in the Scottish Highlands. The film uncovers the destructive effects of the collapse on those who were employed by the industry, and showcases the grand visual spectacle of the dereliction of the rigs in the Cromarty Firth. The first part documents the Kishorn fabrication yard on the west coast of the Scottish Highlands, encountering those who worked there during the great boom of the 1970s and 80s, and showing the ghostly remains of the yard in its current all but abandoned state. The second part shows the Cromarty Firth, where dozens of unused oil rigs are ‘cold stacked’, covering the effects of economic decline on those who formerly worked constructing the platforms. The final section looks to the future, considering the otherworldly beauty of the new form of energy that is dominant in the highlands: wind farming.

Cold Stack will be followed by an in-person panel Q&A with Frank Martin which will be live-streamed from the cinema to Selects. This is also available to watch below.