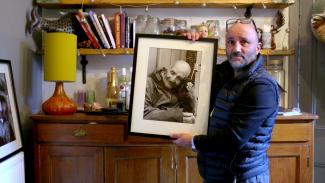 In the early 1970s, photojournalist Don McCullin photographed the area of Toxteth in Liverpool, capturing the place during an era of transition and decline. Focusing on one photograph from his collection, Almost Liverpool 8 paints a parallel contemporary portrait of the same area through the eyes of the people who inhabit it today. From Turner Prize winning projects to a new generation of poets and artists, this film heads into the heart of the community to meet photographers, beekeepers, urban griots, and the people that make ‘L8’ a model example of a modern community. A melting pot of cultures where Georgian townhouses rub shoulders with social housing, and Mosques stand opposite Synagogues, people from all countries converge in an area that is as diverse as its population. Almost Liverpool 8 is a lyrical look at an often misunderstood community.

Don McCullin: Almost Liverpool 8 will be followed by an in-person Q&A with Daniel Draper and Allan Melia which will be live-streamed from the cinema to Selects. This can also be watched below.