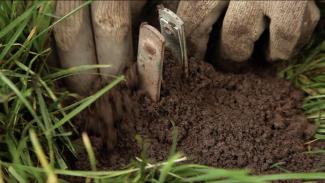 Earth Swimmers attends to the tricks and techniques that mole catchers use to access the underground world of the mole. Using tools as portals into the mole's vibratory world, probes, feet, noses and worm-charming instruments lead the viewer into alternative ways of sensing and knowing the earth.

Below, find an essay expanding on the collaborative process between Hermione Spriggs and Nigel Stock:

I have only ever seen dead moles, crammed into a large Victorian glass jar like some grotesque confectionery. They’re still there, floating in formaldehyde on a dusty museum shelf, faces creased in sweet smiles. I tell you this because it seems relevant to Hermione Spriggs’ Earth Swimmers: a short film in communion with a mole catcher. Those museum moles come back to haunt me, now, and I imagine them tumbling out to freedom.

Moles are as much part of the British countryside as rabbits or foxes, yet you, too, are unlikely to have ever seen a live one. Perhaps you’ve tripped over a molehill or fortress – characterised by the RSPB nature conservation charity as being ‘especially conspicuous on the lawn’. The creature that spends its time in darkness beneath the damp underbelly of the North York Moors is all paws: four pale, almost translucent clawed feet, surrounding a fat little bat-like body. It has a second thumb, a wriggly wrist bone extending front paws into excellent scooping tools. Far from useless, minuscule mole eyes have advanced retinas that detect light and inform its body clock. It sculpts tunnels morning and evening to the exact width of its tiny bulk, feeling its way forward with highly sensitive whiskers and a wet snout. The mole is capable of shifting thirteen pounds of soil in twenty minutes, which is astonishing for such a small thing; it weighs less than a Heinz baby can of spaghetti and the earthworms it slurps, much like strings of pasta, are often longer than the beast itself.

Earth Swimmers provides a mole-eyed-view of sorts, through the expertise of mole catcher Nigel Stock. Partly the film listens in on Nigel and Hermione on one of their walks, contemplating a pool of water – what’s in it, under it, how deep, how far a dog would sink into the mud – and partly it tracks Nigel walking across nearby fields, over unseen burrows. We push into collapsing soil via a telescopic camera, probe-like, and become an extension of Nigel’s body; his boot carefully tests the summer earth to see where it gives way to tunnels and a stick is inserted, a gap created, for the snare. Traditionally, trap pegs, or ‘mumble pins’, were made of wood and held supple with saliva in the catcher’s mouth until needed, causing the mumble of the name. Now, he uses a metal contraption that can be bought online for as little as £4.

Hermione’s tread is soft around these customs. Any arguments of whether the mole is a ‘pest’ or not and what should be done about it – of which there are many – are never discussed. What is keenly felt is an uncomfortable paradox: hunters are often those who love animals the most. Nigel loves moles. I love animals, eat meat, and occasionally visit zoos. I am a hypocrite. The auditory and visual experience of Earth Swimmers upends our human perspective and takes us, literally, into the earth, and into a type of thinking that is uncomfortable. I quietly urge the mole to escape.

At no point do we learn why Nigel hunts. He is highly skilled, able to access signs and sensations that are invisible to the rest of us. Nigel himself is more of a mysterious and endangered species than the mole. At a time when people are calling large companies, like Rentokil, to fumigate the land with chemicals, he trains apprentices in the old ways. His primary goal is to think like a mole, anticipate its movements, and make a mole trap fit so perfectly into its tunnel that it never suspects that certain death awaits. Let’s speak plainly of that death: the last thing the mole will hear is the twang of the spring-loaded wire and the crack of its breastbone. The film walks a tense line between these contradictions: of carefully studying animals and systematically killing them; of concern for – and pride in – a job well done, even if that job is extermination.

It’s winter now and Nigel will find the earth harder to excavate. His breath will plume in the cold air, but his moles will be warm, nesting deep underground. I re-watch the scene of his dirty boots in slow-motion, the distorted sound of a shotgun exploding in the distance, and fancy a tenacious mole picking up on these vibrations and becoming suspicious of the tunnel ahead; stopping, sniffing, and alert, whiskers twitching, before digging a new path entirely.