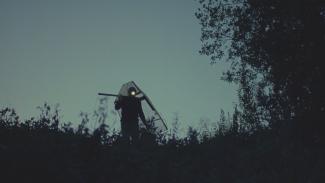 Shot over a moonlit night, The Elvermen is an atmospheric film that reveals the last of a hidden community hunting an endangered fish. As the sun sets on the banks of the River Severn, on the outskirts of an impoverished city in the UK, a group of men race to catch a vanishing creature, the elusive elver (baby eel), supposedly worth more than its weight in gold. Over the course of a single night, the film surveys the mysterious world of the Elvermen: fathers, sons, brothers and friends addicted to the gamble of the stake-out, and the promise that it offers. Phone calls of frustration and joy echo down a river lit by head torches. The Elvermen shows how a rite of passage has changed into a fight for values: for tradition, for community, and for a connection to nature in an environment of impending change.

The Elvermen will be followed by an in-person Q&A with Isla Badenoch which will be live-streamed from the cinema to Selects. This is also available to watch below.