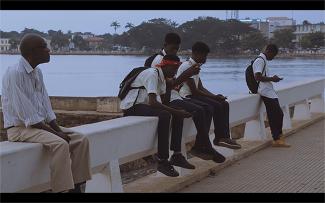 On May 30th 1967, Colonel Odumegwu Ojukwu unilaterally declared the independence of the state of Biafra from Nigeria. The Nigerian federal government, ruled at the time by Yakubu Gowon, led a military offensive over Biafra to attempt to recover the region. Hostilities opened the way for large-scale war, the first post-colonial conflict on African soil. São Tomé, then a Portuguese colony, is close to Biafra by air. Its geographic position allowed the establishment of humanitarian airlift efforts which saved hundreds of thousands of children from starvation, an event widely considered to be the first civilian aid operation in the 20th century. Through archive, landscape, and the contemporary testimonies of the child refugees and humanitarian workers involved, Equatorial Constellations traces the physical and immaterial debris that remains in São Tomé.

Equatorial Constellations will be followed by a live online Q&A which will be live-streamed from the cinema to Selects.