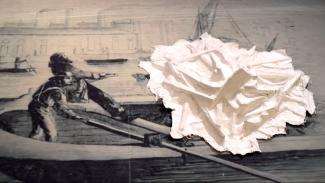 View Joules for free on our Online Exhibitions Platform.

Joules is a project based around the court testimony from Elizabeth Forrester (a witness in the 1798 Wapping Coal Riots in London) who claimed that a police officer shot two people with one bullet (one rioter and one police officer). This moment took place within the opening of the Thames River police unit (known as the advent of preventive policing), a department of a shipping company (West India Committee) commissioned to prevent loss in their inventory. The film performs a motion-study of the "double-shot" that Forrester witnessed, through studying the motion of property title, as a trajectory of exchange. The physics of "Work" (Force x Distance), frames the historical moment in which a wage per time unit was introduced by the Thames River Police, to replace the dock-workers' traditional wage system. Based on the police archives, it looks at the indexicality formed between “loss” and “criminality”. Through looking at negative space (the possible undead history that Forrester claimed), the film crystallises the material history of criminalising supply-chain workers, within a dramaturgy that unpacks the interweaving of historical, cinematic, and logistical conceptions of lost time.