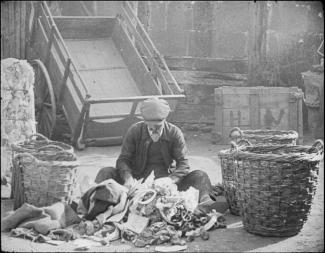 La Zone: au pays des chiffonniers is a silent documentary which was the first film of Georges Lacombe. Starting as an assistant director to René Clair on films like Entr’acte (1924), Lacombe would initiate his directorial career with this avant-garde work that is distinct from the rest of his filmography.

Produced with activist motivations, La Zone shows life “in the land of the ragpickers” (the film’s subtitle), the outskirts of Paris where urban poor live in caravans, hastily-built cabins and among dire conditions. A precursor to other whistleblower documentaries like Luis Buñuel’s Land Without Bread (1933) and Lee Dick’s Men and Dust (1940), La Zone documents the beauty and tragedy of life quite literally on the fringe, a zone that circled the periphery of Paris and which would later be demolished to make way for the Boulevard Périphérique. Though this area no longer exists, the harsh conditions depicted in La Zone are still common across the world today.

La Zone will be screened in 35mm with recorded music and translated French intertitles. This screening made possible with the support of the Institut français du Royaume-Uni.