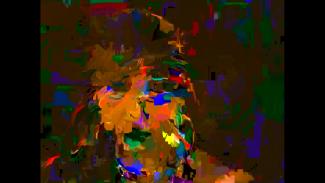 Madness Remixed explores the image of exoticism portrayed by Josephine Baker in a 1926 performance entitled The Madness of the Day in which Baker wore the infamous skirt, made of only bananas, that played into stereotypes of Black women as hyper-sexualised. Madness Remixed questions the conditions under which the skirt should be revived, considering that Beyonce, Miley Cyrus, and Diana Ross have all worn the same skirt more recently. 16mm film coated with latex and glitter – a fetishised medium in itself – is data-moshed with Baker in Siren of the Tropics (1927).

Madness Remixed will be followed by a live online Q&A with Rhea Storr which will be live-streamed from the cinema to Selects.