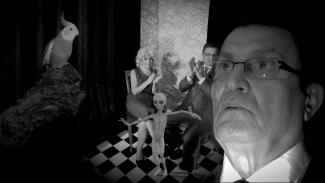 View Moonscape for free on our Online Exhibitions Platform.

Moonscape is a short film which takes the form of a music video for a ballad/middle-of-the-road song, performed in Arabic as a duet between a male and female singer. The song makes a connection between the artist, a young Palestinian woman living under Israeli occupation, longing to end the misery of her people in any way possible, and Dennis M. Hope, a man who claimed ownership of the moon in 1980 and founded the Lunar Embassy, a company that sells land on a variety of planets and moons.

The visuals of the film are a hybrid of surrealist scenes from the Arab music industry, reenacted by the artist’s parents who play the roles of the singers in the film, and film noir; found footage from the NASA archives; references from canonic films which influenced the art world and show representations of the moon, and screenshots of email correspondences with staff members from the Lunar Embassy. The film serves to explore the relationship between hope, nostalgia and despair.