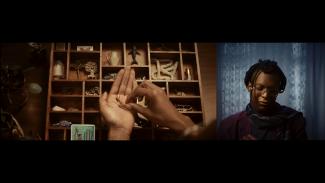 View Octavia's Visions for free on our Online Exhibitions Platform.

In the mid-1990s, the African-American visionary author, Octavia E. Butler, published two novels later to be called the Parable Series. In Parable of the Sower and Parable of the Talents Butler tells the story of a community struggling to survive the environmental, socioeconomic and political collapse of 21st century USA. Butler, who died in 2006, created characters and worlds that remain highly topical today. Her complex characters are genderfluid time travellers, atrocity survivors, Black women and People of Colour. Inspired by the Parables, Octavia’s Visions speaks to contemporary themes of environmental degradation, far-right extremism, and social liberation. The poetic piece expresses a queer utopian imaginary, a longing to create out of the old something new.