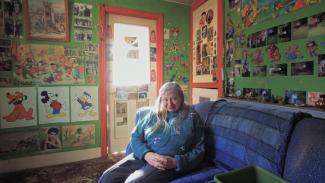 Restricted by her lifelong agoraphobia, Kaye has spent most of her life within the four walls of her parents’ house. Finding relief from her fears in the faces and lives of old film stars, she pastes their images alongside those of her deceased family on the walls of her house, creating a kaleidoscopic collage that mixes personal history with Hollywood fantasy. Told first-hand via freewheeling monologues, Portrait of Kaye is a bittersweet portrait of a woman forming her own unique identity while navigating the conflicting influences of her mother’s bawdy humour and her father’s anxieties. Now 74 and recently widowed, her infatuation with a younger neighbour gives her an opportunity to explore personal and sexual freedoms that have always been hidden away. Shot over two years, former next-door neighbour and music video director Ben Reed has assembled a unique and touching meditation on family, film and the meaning of freedom.

Portrait Of Kaye will be followed by an in-person Q&A with Ben Reed which will be live-streamed from the cinema to Selects.

Portrait of Kaye + The Battle of Denham Ford