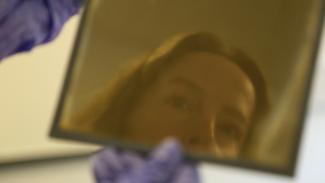 Constructed during a three-year-long research period that involved visits to more than 20 centres and laboratories dedicated to the advanced research of outer space, The Quintessence considers the scientific study of outer space as a narrative, and analyses the hidden dreams and expectations of those shaping contemporary research about the universe. Audio interviews with scientists provide an intimate insight into astrophysicists’ ideas and creative intuitions, moving beyond the traditional academic representation of scientists as individuals possessing an unquestionable knowledge of the universe, while the visuals generate a sensorial representation of highly-secluded scientific laboratories, often situated in remote locations and usually not accessible to the general public. Looking into the nature of scientific progress, and our role as investigators of the universe, this film provides a unique angle on the act of looking at the stars.

The Quintessence will be followed by a Q&A with Pamela Breda which will be shown after the screening and be available on Selects.