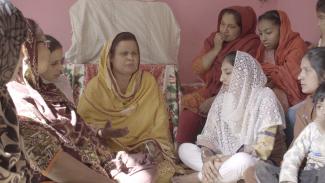 Detailing the preparation of the multi-city Aurat March (Women’s March) in Pakistan, This Stained Dawn tells the story of a feminist movement asserting itself in the country’s urban spaces through the eyes of the march’s organisers. Just a few weeks before the start of the pandemic, 10,000 protesters gathered in Karachi. Filmmaker Anam Abbas follows the organisers of the march as they negotiate a deeply surveilled, paranoia-inducing, and often physically violent space in the hopes of spurring a revolution. The film’s approach is, suitably, a polyphonic one. Observational footage of the event’s planning and orchestration mixes with animation, surveillance footage, and archive, tracing a history of the state suppression of women’s resistance in Pakistan and illuminating the urgency of the unfolding struggle of today. What emerges is a philosophical work, not just about the Aurat March, but about the act of political organising itself.

This Stained Dawn will be followed by a live online Q&A with Anam Abbas which will be live-streamed from the cinema to Selects.