Tales from a Hard City 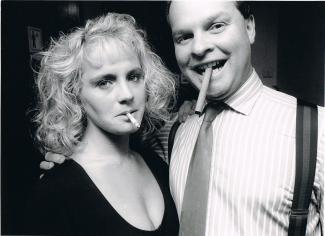 It is 1993, and Sheffield is reeling from the collapse of heavy industry. Kim Flitcroft’s Tales from a Hard City follows four individuals as they battle for survival in the post-industrial landscape of the city. Car thief Glen dreams of being a singer. Paul is a boxer who secretly wants to become a celebrity. Wayne, a media mogul, approaches tabloid sensation Sarah upon her return to Sheffield, after she makes news for being arrested in Greece for dirty dancing. Wayne wants to launch her into the big time. These four cross paths one night at Josephine’s, a nightclub in the city, and all their lives irreversibly connect. An award-winning film on release, Tales from a Hard City has since become something of a cult film, counting a range of pop stars as fans – including Mogwai, The Chemical Brothers and Jarvis Cocker.

Tales From a Hard City