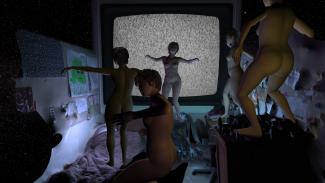 View A Ritual for Metamorphosis and Premolt for free at Site Gallery or on our Online Exhibitions Platform.

Heesoo Kwon’s A Ritual for Metamorphosis (탈피를 위한 의식 ) is a video in which the artist attempts to re-frame her traumatic personal experiences through creating an alternate reality. Kwon imagines virtual space as a utopian realm where one can reimagine and revisualise the past. Through the body of a nude 3D avatar, she travels back to her childhood home, stepping inside home video taken by her father of family gatherings long ago. There she faces patriarchal family rituals and coercive religious rituals that she didn’t notice when she was young, and interrupts them with her avatar. On the soundtrack, we hear the repetitive rhythm of traditional ironing sticks hitting stone, used both a metaphor for the invisible labour of Korean women, and as a sound of healing and catharsis.

Shown alongside the video, Kwon’s photographic series Premolt similarly inserts digital avatars of herself and her familiar women ancestors into domestic photographs from when she was young, another humorous and uncanny metamorphosis.