They Won't Call It Murder 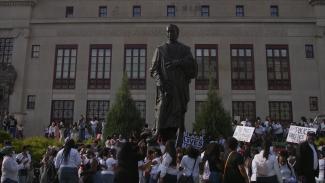 Police have been killing people in Columbus, Ohio, with near impunity for more than two decades, leaving behind a community bound together by grief – and a system that refuses to call these killings murder. In a searing indictment of the police and justice system at large, educator and curator Ingrid Raphael and journalist Melissa Gira Grant have collaborated in this short film, which spotlights the testimonies and resistance strategies of the loved ones of Henry Green, Tyre King, Donna Dalton and Julius Tate. These are the mothers, sisters, and grandmothers of those who were killed by Columbus police, women seeking justice for their family members, despite knowing that it is unlikely to be found within the system that caused their wrongful deaths.

They Won't Call It Murder will be followed by a live online Q&A with Melissa Gira Grant and Ingrid Raphaël which will be live-streamed from the cinema to Selects.