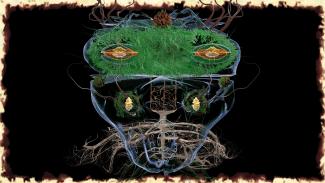 Below, find an essay expanding on the collaborative process between April Lin 林森 and Dr. Nalini Nadkarni:

SCIENCE AND THE SACRED
by Martha Adonai Williams

As I stepped away from a video call with artist-filmmaker April Lin 林森 and ecologist Nalini Nadkarni discussing their new work TR333, what remained with me was how distinctly generative our conversation was, not the usual pattern of speaking and listening but a moment of hearing each other and ourselves in such a way that it created something new, a new place to inhabit and with it new possibilities for being and doing; a process Nadkarni described as integrating your identity with the identity of someone else.

Much like TR333, the experimental documentary and composite tree-being of the same name, their collaboration also took on life to create a hybrid experimental position that sits between the scientific and the sacred, an adaptive, progressive response to uncertain times.

This text is not verbatim but a representation of our conversation, a grafted version of a much longer, more iterative exchange.

THE SCIENTIFIC AND THE SACRED

AL: One thing that was important for me in this collaboration was how it allowed for this fusion between the scientific and the sacred, the sacred in this sense meaning emotional or creative or unpredictable. It felt important to be able to approach these beings using a more complete gaze that has elements of both scientific practice and a way of knowing, or feeling, in relation to these beings, as seeing them as co-inhabitants of this planet.

NN: Something April and I talked about was these multiple ways of knowing and communicating. That none of the sectoral approaches will be the truth or the answer. I sense that there's something deeply important there, especially for scientists, because scientists are often credited in our society as having the answers, the truth, the ways of fixing the world, and in fact we know that that isn't true.

AL: Documentary film is similar to the scientific disciplines in its idea of truth, or claim to truth, and so I was thinking about what it really means to make a film that is scientific but also speculative. It feels like we're talking about knowledge and the different kinds of knowledge that help us. This disarms the desire for the unlimited knowledge we want science to be able to give us. It takes everything and puts it in this realm of imagination where you can't really explain but you know things to be true.

This collaboration could easily have been one in which Nalini has scientific training and knowledge and April uses their filmmaking skills to translate that into a cinematic medium. I really feel instead that we hybridised our different ways of seeing the world or gaining knowledge about the world and made this other worldview.

NOT JUST THE OLD WAY OF LOOKING

NN: I was recently a judge for a wildlife film festival in the US for a section of tree films. I saw like 12 films about trees and they were all these traditional documentaries getting this footage of “look at this amazing tree” or “look at this amazing bird” and, to be honest, it left me feeling kind of empty. Maybe it's because I've seen too many documentaries, but I was not moved by them. They didn't make me feel like I really need to take care of this place. It was such a sharp contrast to watching April's film because that did make me feel, this is new. This is not just the old way of looking.


AL: It feels like it's been done so much, the David Attenborough kind of gaze, this more objectifying study. To some extent it does, but it hasn't really for me, done anything in terms of routing back into your own body, your own intuitive ways of getting to know a plant and why you should care about them.

NN: One thing I was struck by was an emerging theme of identity and the impetus, at times, to shift identity, and how important that is, not only for the person or being that has chosen to shift away from the traditional but also for other people to recognise and respect that.

AL: There’s a parallel between how TR333 disidentifies from their Latin assigned name and how I identify as non-binary and, in that sense, am also disidentified from normative structures of gender. I guess that's why identity is important, or why I feel it is important, and TR333 feels it's important. It identifies the kind of world that you want to live in, or you want to move in, and it's a step in materialising that.
NN: I think the message at the end also has to do with identity, and this recognition that we as humans need to shift our identities, from being consumers of trees to being partners, companions and treasurers of trees.

AL: It’s been a growing thing for me, to learn to take it step by step, to see it as ripples rippling out. I think that translates to the end not being very, “These are the things you need to do,” but it being about reorienting your person or your life or your gaze.