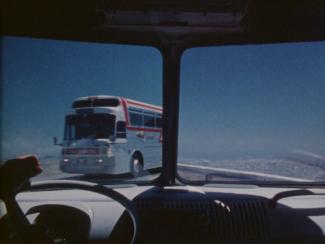 While working as a delivery driver, artist Al Wong became captivated by the meditative qualities of the looping roads around San Francisco’s Twin Peaks. These roads create a hypnotic figure-8 pattern which is traversed during morning, night, summer or winter, in rain and sunshine throughout the course of a year. But rather than a simple documentation of these journeys, this long-form structural film utilises Wong’s conceptual explorations to create a stunning, sensual work of pure cinema that continually upends our perceptual expectations. On the soundtrack, we hear the continual lapping of ocean waves, signifying the infinity of the natural world. A student of the legendary Sōtō Zen monk Shunryu Suzuki Roshi, Al Wong here creates a film which perfectly symbolises the endless cycles discussed in Zen Buddhist philosophy. A monumental, largely-unseen masterwork 1970s avant-garde film, Twin Peaks has been restored in 16mm by the Pacific Film Archive and will be screened outside of the United States for the first time at Sheffield DocFest.