The Year of the White Moon / God Beloi Luni 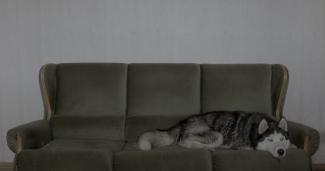 In the intimacy of a muted, deserted living room, a series of telephone conversations take place between a superstitious mother living in the Russian provinces and her gay son, who moved to the capital. The Year of the White Moon is a tragicomedy about a conversation between two people who hear each other, but are not able to listen.

The Year of the White Moon will be followed by a Q&A with Maxim Pechersky which will be shown after the screening and be available on Selects.