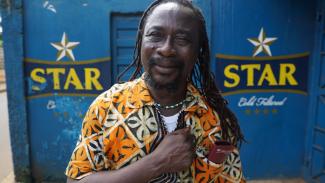 Raised in Sierra Leone, and now a Londoner, Sorious Samura is one of his nation’s most celebrated TV journalists. However, two decades of telling negative stories about Africa has taken its toll. Desperate to change the narrative, he turns to his best friend and mentor, Charlie Haffner, a playwright from Sierra Leone. Together, these two friends embark on a journey to create an inspiring work of national theatre, hoping to restore pride to a nation that despite having an amazing history, remains one of the world’s poorest countries. Grappling with themes of national identity and the profound impact of British Colonial rule, the pair’s personal and creative differences threaten to derail their project and their lifelong friendship. Cultures collide and tensions flare as the nation itself teeters on the brink of civil unrest. For both men, the play becomes a matter of personal and national salvation. Exhausted, they push to opening night. The curtain lifts.

Sing, Freetown will be followed by an in-person Q&A with Clive Patterson and Sorious Samura which will be live-streamed from the cinema to Selects.