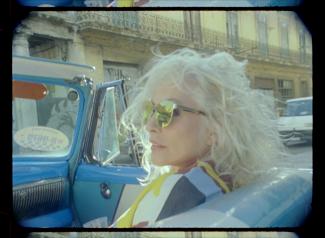 In 2019, a 40-year-long dream comes true for Blondie when the band is invited to tour Havana, Cuba. For songwriter and guitarist Chris Stein, growing up in New York, Latin music was always “part of the background of life.” For the legendary post-punk group, this trip gives them the chance to collaborate with incredible Cuban musicians, creating some magical musical moments born out of their cross-continental collaborations. Artist Rob Roth combines Super 8 and 16mm footage of the streets of Havana with performance footage in the city filmed digitally. With narration from Blondie founders Debbie Harry, Chris Stein, and Clem Burke, providing a glimpse into the passion and beauty they discovered in Havana, they speak of performance as a means of bridging political and cultural divides. As Harry says: “music is its own language.”