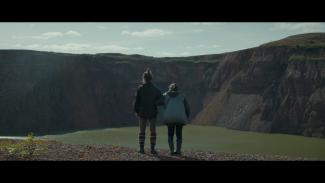 This tender portrait of Innu poet, writer, filmmaker, and storyteller Joséphine Bacon follows her from the snowy streets of Montreal to the region along the coastal mouth of the Saint-Laurent river, occasionally accompanied by Ilnu-Québécoise poet Marie-Andrée Gill. Bacon talks of her efforts to salvage and preserve her elders’ ways of thinking and traditions, which the forces of Canadian colonisation have attempted to stamp out. Bacon is focused on preserving their stories for the next generation. Accompanying her through media appearances, readings, and revisiting the places of her childhood, Call Me Human takes the viewer on a heartening journey alongside a woman and her life’s work – through which she pieces together the fragments of herself that were stolen from her, and her fight to revive and preserve her culture.

Call Me Human will be followed by a Q&A with Kim O'Bomsawin which will be shown after the screening and be available on Selects.