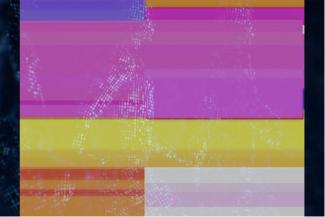 Fi Dem III, like preceding instalments of Zinzi Minott’s project, invokes the HMT Empire Windrush’s mid-century voyage from Jamaica to London – except now we see it placed explicitly alongside emblems of the transatlantic slave trade. Minott is aware of the slave ship’s hold, stretching across centuries of Black Caribbean history into the present, but the artist also turns our attention to the legacies of Black Caribbean life, sound, resistance, and communion within its diaspora. Fi Dem III draws from personal and familial archives to chart several Black Caribbean journeys and narratives, some of which have been imaged and returned to throughout the series. For Minott, a trained dancer who was raised within sound system culture, Fi Dem’s clashing images and sounds are a way of “editing with the body” to create the feeling of movement central to her training, and to the migratory lives of Black Caribbeans.