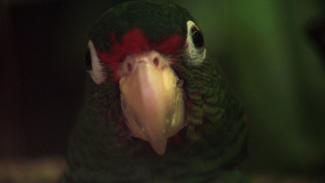 The Great Silence centres on the world’s largest radio telescope at the Arecibo Observatory in Puerto Rico, which transmits and scans for signals from the farthest reaches of the universe. As astronomers listen for signs of extra-terrestrial intelligence in outer space, the critically-endangered Amazona vittata parrots that surround the observatory ask: “why aren’t humans interested in our voices?” Featuring a script by science fiction author Ted Chiang, The Great Silence ponders the contradiction of a species so intent on communication with others, yet so destructive to life on its own planet. With the power of a fable, the parrots tell the story of humans’ search for other intelligent life, while lamenting their own imminent extinction and the subsequent loss of their language, stories, and traditions.

Edition of 3 + 2 AP
Courtesy of the artist and Galerie Chantal Crousel, Paris