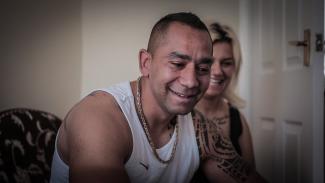 In and among the streets and gyms of Sheffield, Horvath follows a Roma Slovak family on their relentless journey through the kickboxing ranks. Uprooting his family from Slovakia to England, where they settled in Page Hall, Sheffield, in 2012, Ladislav Horvath took the decision to pursue his dream of kickboxing stardom, which his family have supported. Now a local hero, Ladislav has fought on the national Muay Thai and K-1 kickboxing circuit, with the adoration of a close and loyal following who have travelled with him up and down the length of the country. Set against the gritty backdrop of regional and national fight competitions, the film shows the reality of life in the ring.

Horvath will be followed by an in-person Q&A with Jim Wraith which will be live-streamed from the cinema to Selects.