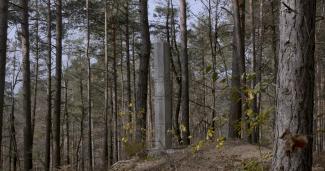 The Path of Remembrance and Comradeship is a long walkway encircling Ljubljana, Slovenia, charting the length of a military perimeter that surrounded the city during its occupation in World War Two. Seventy large stones dot the path at intervals along the way, marking the position of former bunkers erected by the Italian and German armies to quash a burgeoning partisan resistance. Wryly mimicking the leisurely pace of a stroll, Michael Pattison’s Lubiana Laibach inches along the path one boulder at a time. The film is made up of a dazzling montage of static shots, one dissolving seamlessly into the next. The marker of each shot to the other is the fixed outline of the stones themselves, which do not change position on screen. What warps and transforms before our eyes is the space around them, a powerful evocation and metaphorical reanimation of the invisible contours of a history of resistance.

Lubiana Laibach will be followed by an in-person Q&A with Michael Pattinson which will be live-streamed from the cinema to Selects.