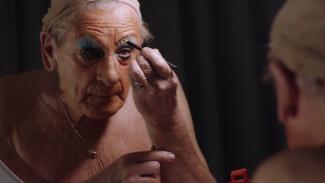 After fifty long years in the business, David Raven is still shaking his sequins as ‘Maisie Trollette’, Britain’s oldest drag artist. David’s 85th is fast approaching and a special birthday performance has been arranged for him in Brighton, the UK’s capital of camp. Walter Cole, who, at age 87, holds the record for the oldest performing drag queen in the world, is flying from Portland to meet David for the first time. But professional rivalries soon flare between Britain’s feisty Pantomime Dame and America’s regal Pageant Queen, and as the big day grows nearer, David must deal with the unique challenges that performing in your eighties can bring, including battling with Alzheimer’s. Featuring Broadway classics such as “Lady is a Tramp”, and “If I Never Sing Another Song”, Maisie is a heart-warming, and often heart-breaking peek into the world of a character more colourful than his gowns.

Maisie will be followed by an in-person Q&A with Lee Cooper, Deborah Aston and Miss Jason which will be live-streamed from the cinema to Selects.