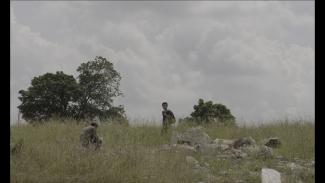 After two decades of avoiding the Qing Ming festival tradition of grave-sweeping, Liao Jiekai visits the graves of his ancestors. Here at the cemetery, everything looks different: the Singaporean mass exhumation programme has transformed the landscape, and Liao has no coordinates anymore. Lost in that space, he finds an old man from the future: his future self. Together, they embark on a journey of retracing the places their family would visit during the festival. Along the journey, they re-enact and contemplate their ancestral roots and redeem the ravages of time. Stones – an anthology of poems by the Singaporean writer Yeng Pway Ngon – inspires and haunts this film, building a multi-layered meditation on the passage of time. Death and the transference of spirits appear within a film that confronts both tradition and modernity.

On Memory will be followed by a live online Q&A with Liao Jiekai which will be live-streamed from the cinema to Selects.