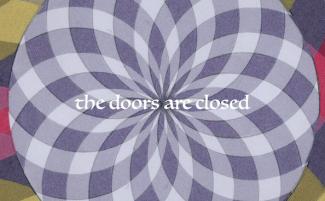 View Rabbit Hole for free at S1 Artspace or on our Online Exhibitions Platform.

“Yes, a white wardrobe can be a rabbit hole. That’s definitely unusual!” Sophie Michael’s new moving image work finds its unique meeting point in the connection of proto-cinematic, abstract experiments with the development of early years speech in children. As such, Rabbit Hole centres on two distinct perceptual phenomena that are magical and seemingly beyond rational explanation.

The images are made up of collages on sugar paper which reproduce chromatropes, abstract colour slides used during the pre-cinema Magic Lantern shows of the late 19th century. As these colourful, geometric collages spin and create hypnotic patterns, we hear the voice of a young child (the artist’s three year old son) talking in solitude, testing out new combinations of words to depict a high place in the room on which origami rabbits sit. His words are shown on-screen, at the centre of swirling, mandala-like patterns, lending associations between this grasping for language, the wonder of proto-cinematic spectacles, and the psychedelic-era experimental films of artists like Jordan Belson, James Whitney and Hy Hirsch, made in the 1950s and 60s.