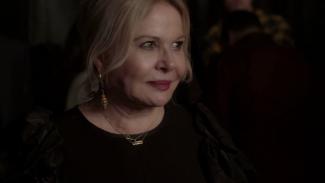 Raymonde: diva, queen, enigma, inspiration, survivor, widow, woman, and mother. Armed with a camera, Yaël Abecassis – a famous actress who has worked with Amos Gitai, among other renowned filmmakers – follows her mother, the legendary singer Raymonde El Bidaoia, and steps into a world where she had always been a stranger. “You know, daughter, Morocco is a kind of therapy”, Raymonde says, before they embark on a journey. The film moves from Abecassis’s childhood, which was spent between the Mellahs of Casablanca and the dunes of Ashdod, before travelling back to Morocco, the place where her mother found her fame. As they travel together, Yaël discovers a woman who articulates her weaknesses and the complexities of her choices with a keen sense of self-awareness. This film shows a mother and daughter as bound by pain, guilt, admiration, and above all else, their limitless love for music and each other.

Raymonde el Bidaoia will be followed by a Q&A with Yaël Abecassis which will be shown after the screening and be available on Selects.