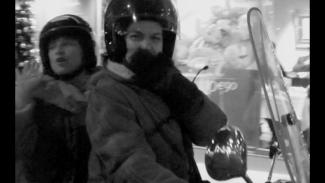 Reviewing mini DV tapes shot over a decade, filmmaker Vivian Ostrovsky rediscovered a forgotten night sequence showing Chantal Akerman and Sonia Wieder-Atherton leaving a brasserie that they had all dined at in Montparnasse, Paris. After lingering on the excerpt, Ostrovsky decided to focus on the role of music in Akerman’s films and the artist’s close collaboration with Sonia Wieder-Atherton, the cellist with whom she made more than 20 films. Intertwining her own images from New York, Paris and Moscow with material filmed by Akerman, Ostrovsky looks for commonalities between herself and these two women.

SON CHANT will be followed by a Q&A with Vivian Ostrovsky and Sonia Wieder-Atherton which will be shown after the screening and be available on Selects.