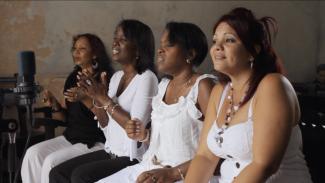 The Vocal Vidas are an all-female a cappella group from the cradle of Afro-Cuban music, Santiago de Cuba, their infectious spirit and four-part harmonies draw from a melting pot of multicultural references, embodying the sounds of Cuba. In 2017, the ensemble were invited to perform in the United States for the first time, just as diplomatic relations between the US and Cuba began to falter. As they travelled to Los Angeles, playing in restaurants and jazz clubs while preparing for their biggest concert ever – in front of 4,000 Angelenos at Downtown LA’s Grand Performances – the journey of the Vocal Vidas came to resemble the story of two geographically close yet ideologically disparate cultures, hoping to reconnect in the face of international uncertainty.

Soy Cubana will be followed by a Q&A with Jeremy Ungar, Ivaylo Getov and Robin Miller Ungar which will be shown after the screening and be available on Selects.