Two Sons and a River of Blood 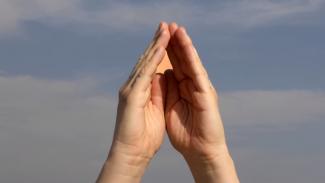 A queer woman is pregnant. The self-made family unit of two dykes and a trans man imagine a kind of erotic magic that will allow for procreation based solely on desire. Together they enact a public sex ritual to symbolise their hopefulness for multiplicity, acknowledging their cyborg bodies as technological interventions. When the queer woman miscarries her child, the three begin to build their own mythic understanding of where bodies live when they are not inside us. They create a story to trace movement of the non-body – from a hole, to a river, to a room. Images of an imaginary white room – an Ikea-esque torture chamber of stillness – haunt them. As a parallel emerges between the pregnant body and the trans body, their techno sex act becomes the key, and a pyramid becomes the portal, to access this other world of non-bodied existence.

Two Sons and a River of Blood will be followed by a live online Q&A with Amber Bemak and Angelo Madsen Minax which will be live-streamed from the cinema to Selects.

HARD TO BE HUMAN